Aikido is a responsive martial art in which the practitioner, called an Aikidoka, uses off-balances and an attacker's own strength and momentum to gain control instead of attempting specific techniques to prevail. An advantage of this tactic over martial arts which emphasize ways to directly injure an attacker is that Aikido can be performed by people of almost any age or size, often despite physical limitation, and still be effective against even the largest and strongest of individuals.

Because of the risk of physical harm inherent in the practice of any martial art, Aikido practice is co-operative in nature. We do not train with "opponents, "but with "partners." When we practice a technique, our partner's job is to set up a situation in which that particular technique will work properly. The partner, or uke, does this by attacking and reacting in a specific way which safely simulates a real attack. Uke does not resist or try to convolute the technique. At advanced stages of practice the partner may begin trying to counter the techniques if given the opportunity; this type of practice leads to free form practice, called randori.

Is Aikido a religion?

The founder of Aikido was a devotee of a modern Japanese religion called Omotokyo. Omotokyo is part neo-shintoism, and part socio-political idealism. Because of the radical beliefs of the founder, some people are concerned that Aikido may be a type of cult or religion.

Regardless of the founder's beliefs, and despite what some people think or claim, Aikido has no unified religious aspect. Instead, there is a philosophy which is more or less shared by most Aikidoka. The core of this philosophy includes two fundamental threads: a commitment to peaceful, creative resolution of conflict whenever possible and a commitment to general self-improvement.

So in short - no, Aikido is not a religion. Aikido training does not involve religious aspects and it does not interfere with or compromise the religious beliefs of the Aikidoka. 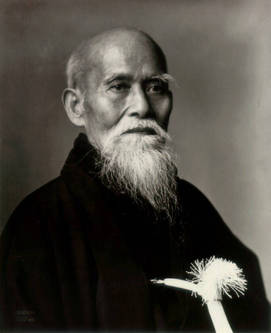 Aikido was invented in Japan during the early 20th century by a man named Morehei Ueshiba. Ueshiba had previously studied various forms of armed and unarmed fighting such as jujitsu, stick-fighting, and spear-fighting. All of these previous studies blended with Ueshiba's own ideas into what became known as Aikido.

Morehei Ueshiba taught for many years in various parts of Japan. During this time he taught the men who were to spread Aikido throughout the world. Founders of their own schools of aikido include Gozo Shioda and Kenji Tomiki, who were among Ueshiba's first students. Many of Ueshiba's other prominent students studied with him after World War II and continue with Hombu style aikido, namely Saito, Chiba, Saotome, and Tohei.

Kenji Tomiki was a high ranking Judoka when he began studying under Ueshiba. While the different students each picked up on different aspects of Ueshiba's teachings, Tomiki believed the literally thousands of techniques were essentially variations on some recurring, central techniques that could be taught more easily and more in-depth. This led to a parting of ways with Ueshiba.

When Tomiki began teaching Aikido classes at Waseda University and at the Kodokan, he interpreted and conveyed the aspects of Aikido in terms of his Judo training, namely: a strong emphasis on off-balance and ways to proliferate and popularize Aikido in modern society. He also emphasized some elementary principles essential to proper execution of techniques.

Tomiki trained many notable individuals during his lifetime, including Hideo Ohba, Takeshi Inoue, Tsunako Miyake, Riki Kogure, and Karl Geis. Late in his life, Tomiki mandated that Geis spread his teachings in America, with the help of Kogure. Geis formed the Fugakukai International Aikido Association with the goals of teaching Aikido in a way that would appeal to Americans both old and young, small and large. With Kogure's help and Miyake's support, Geis and his students studied Aikido with an eye for utility and practicality over aesthetics, thereby furthering the development of Aikido into the viable self-defense we study today. This search for knowledge continues.